Vehicles have a number of different methods of attaching accessories to the roof. Below, we’ve listed the possible variations to help you understand the crossbars and towers you’ll need to install your tent on your vehicle

A few important points to start off:

These are the small “gutters” on the edge of the roof which can accept a tower that will hold crossbars.

To prepare a vehicle for a tent, you’ll need a set of “gutter-mount” towers and matching crossbars.

Thule, Yakima, and Rhino Rack all make suitable towers and crossbars for gutters. 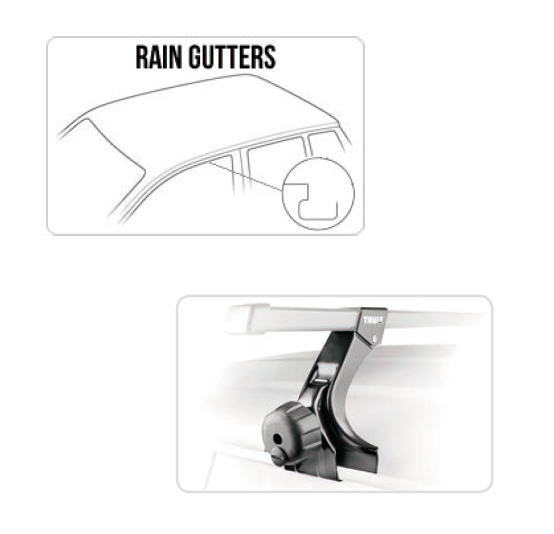 Most vehicles on the road today have bare roofs with no rails or racks preinstalled.

For these vehicles, Thule racks provide the best match between the rack and the specific vehicle, the shape of its roof and door jam, etc. Yakima and Rhino Rack also make vehicle-specific towers and racks and these are also great options.

The next most common roof type is the raised side rails found on the majority of SUVs, wagons, and minivans. Raised rails are factory-installed roof attachments that run from front to back on the outer edges of the vehicle’s roof.

The “raised” rails are distinguished by being open between the rail and the roof – like you can wrap your hand all the way around the rail.

Connecting a crossbar system to raised rails is straightforward and not vehicle specific, you just need crossbars and the foot pack. Raised rails offer the versatility to choose the optimum crossbar location to best support the tent. These rails are similar to the raised rails above but are flush to the roof without any space between the rail and the roof.

There is usually an inner and/or outer groove that allows the connection of a crossbar system. Thule uses a special set of fit kits specifically for flush side rails to provide precise integration to the rail.

Flush side rails offer the versatility to choose the optimum crossbar location to support a tent.

Tracks run from front to back along side the outer edges of the vehicle’s roof and are a channel, usually with some kind of threaded inserts, rather than a raised rail.

The channels offer versatility in positioning of the crossbars from front to back along the length of the tracks. Thule Top Tracks can be custom installed onto truck fiberglass camper shells tops and sheet metal roof tops as well. We hope our crossbars guide gives you the confidence and knowledge to get ready to explore the freedom and adventure that roof top tent camping can offer.

Check out our Support Hub or Call Us.

Check out our Support Hub or Call Us